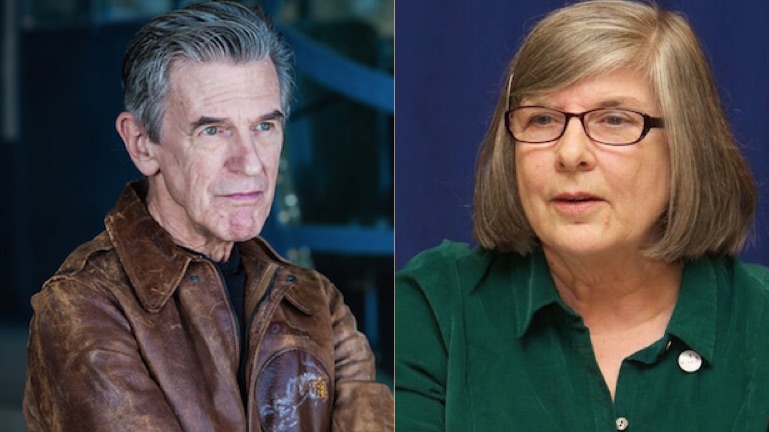 With all the renewed attention to the Vietnam War caused by the Ken Burns documentary, Rag Radio is presenting a two-part series, "Vietnam: The War, the Movement Against it, and the GI Resistance." Thorne Dreyer's guests in part one are author, aviation historian, and Vietnam Vet Thomas Cleaver, and Austin activist and a leader of the '60s-'70s anti-war movement, Alice Embree.

Alice Embree was recently featured in two PBS-generated productions that aired on Austin's KLRU-TV in conjunction with the Burns documentary: "ATX Together: Lessons from Vietnam," which featured a mix of teenagers and boomers discussing the war and its legacy, and "Austin Revealed: Stories from Vietnam."
Among topics discussed on the show are Tom Cleaver's revelations about the Tonkin Gulf "incident,” the history of Ft. Hood's Oleo Strut GI coffeehouse; the story of the Ft. Hood 43, when Black GIs stationed at Fort Hood refused to be deployed against protesters at the Democratic National Convention in Chicago; and larger issues involving the war and the movement against it.

Thomas McKelvey Cleaver, a native Texan, is a Vietnam vet, an aviation historian, a journalist, the author of several books, and a produced screenwriter. He has been an activist on anti-war, political reform, an environmental issues for 50 years. He is an expert on the Tonkin Gulf "non-incident" (as he calls it) that was used as a pretext to begin formal U.S. combat involvement in Vietnam. He was on the staff of the operational command over the destroyers USS Maddox and USS Turner Joy in early August 1964, and has substantial personal knowledge of the events on the Tonkin Gulf. Read Tom's Rag Blog article, "Tonkin Gulf: The event that changed my life forever."

Alice Embree, an Austin writer, activist, and organizer, was active in the movement against the War in Vietnam in the 1960's, participating in one of the first anti-war demonstrations in Texas -- a vigil at President Lyndon Johnson's ranch in April 1965. She also took part in a women's sit-in at the Austin Draft Board in October 1966, and many more anti-war actions in Austin and around the country. She was a pioneer of the Women's Liberation Movement and a founder of The Rag, Austin's legendary underground newspaper.

Tom Cleaver was instrumental in the creation of a contemporary GI coffeehouse, Under the Hood, for GIs at Ft. Hood who opposed the Iraq War, and Alice Embree was involved in the project from 2008-2013.Rag Radio is produced in the studios of KOOP 91.7-FM, an all-volunteer, cooperatively-run, solar-powered community radio station in Austin, Texas, in association with The Rag Blog and the New Journalism Project, a Texas 501(c)(3) nonprofit. The host and producer of Rag Radio, Thorne Dreyer, is a prominent Austin-based activist and writer who was a pioneer of the ’60s underground press movement. The show’s engineer and co-producer is Tracey Schulz and the staff photographer is Roger Baker. The syndicated show is broadcast (and streamed) live Fridays, 2-3 p.m. (Central) on KOOP, and is later rebroadcast and streamed on WFTE-FM in Mt. Cobb and Scranton, PA., on Houston Pacifica's KPFT HD-3 90.1, and by KKRN, 88.5-FM in Round Mountain, CA -- and as a featured podcast at Veterans Today.